Soil clay layers (argillic horizons) play a crucial role in the ecosystem, affecting soil hydrology, fate of contaminants, and plant rooting. In spite of considerable research, their origin is still uncertain. Considerable debate remains on the role of lessivage, the transport of clay from surface to subsurface soil layers due to percolating water. Using a combination of a stochastic model with field observations, here we show that under specific climate and soil conditions, lessivage explains the formation of clay layers. These findings shed light on the potential evolution of soil profiles and properties under changing climatic and environmental conditions. 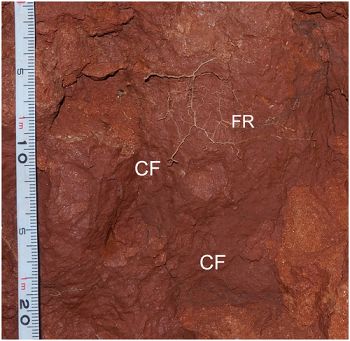 Soils with argillic horizons comprise more than 25% of the Earth's surface. Although their origin is still debated, lessivage is often invoked to explain them, but the long timescales involved hinder its direct experimental verification. We present a parsimonious model of clay transport, formulated for long timescales over which lessivage is modeled stochastically, complemented by detailed field observations. This probabilistic description allows us to predict the clay profile, the depth of the Bt horizon from the surface, and the mean clay residence time. The results are tested with field measurements at different locations in the Calhoun Critical Zone Observatory. Dimensional analysis unveils two dimensionless parameters governing lessivage dynamics, leading to a classification based on erosion rates and lessivage characteristics. We identify static and eluviated regimes, in which erosion or eluviation prevails, and an illuviated regime, in which the balance between lessivage and erosion brings about the formation of a Bt horizon.