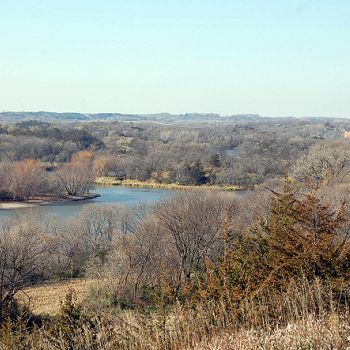 The Minnesota River flows more than 335 miles from its source near the Minnesota-South Dakota border to its confluence with the Mississippi River at Minneapolis/St. Paul. It winds through diverse landscapes and drains nearly 20 percent of Minnesota (16,770 square miles total, 14,840 in Minnesota). Agriculture, primarily corn and soybean production, accounts for the majority of the basin’s land use. As the river enters the Twin Cities Metropolitan area, the basin is characterized by densely populated urban landscapes. The Minnesota River has been cited as one of the most polluted rivers in the state and the nation. In 2008, it was listed on American Rivers top 10 most endangered rivers in the United States. It is the focus of a major restoration effort by local, state, and federal agencies, as well as citizen and nonprofit groups.