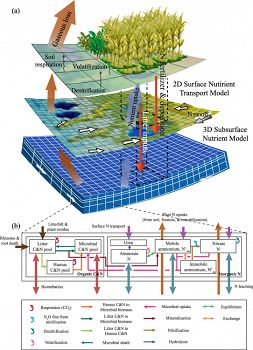 Schematic representation of soil carbon and nitrogen model in a 3-D domain.

Schematic representation of soil carbon and nitrogen model in a 3-D domain.

How does the variability of topography structure the spatial heterogeneity of nutrient dynamics? In particular, what role does micro-topographic depression play in the spatial and temporal dynamics of nitrate, ammonia, and ammonium? We explore these questions using the 3-D simulation of their joint dynamics of concentration and age. To explicitly resolve micro-topographic variability and its control on moisture, vegetation, and carbon-nitrogen dynamics, we use a high-resolution LiDAR data over an agricultural site under a corn-soybean rotation in the Intensively Managed landscapes Critical Zone Observatory in the U.S. Midwest. We utilize a hybrid CPU-GPU parallel computing architecture to reduce the computational cost associated with such high-resolution simulations. Our results show that in areas that present closed topographic depressions, relatively lower nitrate concentration and age are observed compared to elsewhere. The periodic ponding in depressions increases the downward flux of water that carries more dissolved nitrate to the deeper soil layer. However, the variability in the depressions is relatively higher as a result of the episodic ponding pattern. When aggregate efflux from the soil domain at the bottom of the soil is considered, we find a gradual decrease in the age on the rising limb of nitrate efflux and a gradual increase on the falling limb. In addition, the age of the nitrate efflux ranges from 4 to 7 years. These are significantly higher as compared to the ages associated with a nonreactive tracer indicating that they provide an inaccurate estimate of residence time of a reactive constituent through the soil column.