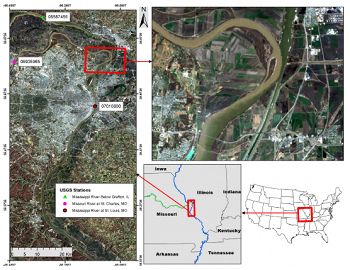 Confluence of the Mississippi and Missouri rivers at Illinois-Missouri border. Locations of USGS stations upstream and downstream of the confluence are shown along with station numbers.

Confluence of the Mississippi and Missouri rivers at Illinois-Missouri border. Locations of USGS stations upstream and downstream of the confluence are shown along with station numbers.

Although past work has noted that contrasts in turbidity often are detectable on remotely sensed images of rivers downstream from confluences, no systematic methodology has been developed for assessing mixing over distance of confluent flows with differing surficial suspended sediment concentrations (SSSC). In contrast to field measurements of mixing below confluences, satellite remote-sensing can provide detailed information on spatial distributions of SSSC over long distances. This paper presents a methodology that uses remote-sensing data to estimate spatial patterns of SSSC downstream of confluences along large rivers and to determine changes in the amount of mixing over distance from confluences. The method develops a calibrated Random Forest (RF) model by relating training SSSC data from river gaging stations to derived spectral indices for the pixels corresponding to gaging-station locations. The calibrated model is then used to predict SSSC values for every river pixel in a remotely sensed image, which provides the basis for mapping of spatial variability in SSSCs along the river. The pixel data are used to estimate average surficial values of SSSC at cross sections spaced uniformly along the river. Based on the cross-section data, a mixing metric is computed for each cross section. The spatial pattern of change in this metric over distance can be used to define rates and length scales of surficial mixing of suspended sediment downstream of a confluence. This type of information is useful for exploring the potential influence of various controlling factors on mixing downstream of confluences, for evaluating how mixing in a river system varies over time and space, and for determining how these variations influence water quality and ecological conditions along the river.