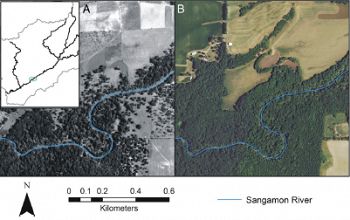 Example of no change in planform along a forested, meandering section of the Sangamon River (A) 1940 and (B) 2012. Location of the site within the USRB shown by the circle on inset map in upper left.

Example of no change in planform along a forested, meandering section of the Sangamon River (A) 1940 and (B) 2012. Location of the site within the USRB shown by the circle on inset map in upper left.

Humans have become major geomorphological agents, effecting substantial change in the characteristics of Earth's physical landscapes. The agricultural Midwest of the United States is a region marked by pronounced human influence at the landscape scale. Humans undoubtedly have strongly influenced critical zone processes, including fluvial processes, in intensively managed agricultural landscapes, yet the exact nature of human alteration of these processes is unknown. This study documents historical changes in the extent of the stream channel network and in channel planform within the upper Sangamon River basin — an intensively managed agricultural watershed in Illinois. Results indicate that the modern channel network is nearly three times more extensive than the channel network in the 1820s. Most change in drainage density has occurred in headwater portions of the basin where numerous drainage ditches have been added to the network to drain flat uplands. No detectable change in channel position is evident between 1940 and 2012 along about 60% of the total length of the Sangamon River and its major tributaries. Nearly 30% of the total length exhibits change related to meander dynamics (cutoffs and lateral migration), whereas about 8% has changed as a result of channelization. Channelized sections typically remain straight for decades following human modification, supporting the notion that humans produce long-lasting catastrophic change in channel planform in this region. The findings confirm that humans are effective agents of morphological change in fluvial systems in this intensively managed watershed. Documenting human-induced versus natural changes in fluvial systems is important for evaluating how other critical zone processes in intensively managed landscapes have been affected by these changes. Humaninduced changes in channel extent and planform most likely have altered this landscape from one dominated by biogeochemical transformations and storage of water and sediment prior to agricultural development into one now characterized by enhanced fluxes of water, sediment, and nutrients.